Skip to content Skip to navigation
See our Campus Ready site for the most up to date information about instruction.Campus ReadyCOVID Help
Chancellor's Advisory Committee on the Status of Women
Monday 20 September 2021

Womxn in the Spotlight

Teenie Matlock is the Vice Provost for the Faculty and Professor of Cognitive Science at UC Merced.  She holds the McClatchy Chair of Communications. She obtained her PhD in Psychology at UC Santa Cruz and was a postdoc at Stanford University and lecturer at UC Berkeley before coming to UC Merced as Founding Faculty in 2004. Matlock led the effort to create the Cognitive and Information Sciences department.  She has published over 75 articles on how humans use language and how it influences everyday reasoning. Her research has been funded by NSF, CEC, and IARPA.  Matlock has served as a member of the National Institute of Health’s Language and Communication study section and on  the Cognitive Science Society governing board and was Associate Editor for Cognitive Linguistics.  She is the recipient of a Sigma Xi award for distinction in scientific research and is the recipient of two UC Merced Senate awards, one for distinction in undergraduate teaching, and the other for excellence in mentoring faculty. Matlock has made extensive contributions to diversity, equity, and inclusion as a faculty member and administrator.  She is the former Vice Chair of the American Indian Council of Mariposa County. 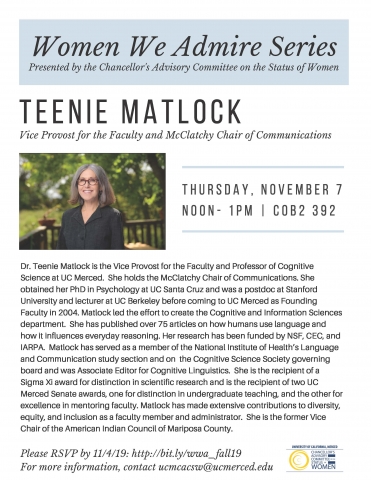